Quantum theory says that everything in the universe has a particle nature, and a wave nature, and that the object’s behaviour exists only as probabilities. No small object actually assumes a particular place or motion until its wave-function collapses. When the wave-function collapses it becomes something like the coffee cup you drink from. But how does the wave collapse in the first place? Improving your karma with quantum physics is as easy as collapsing the cup, so to speak. 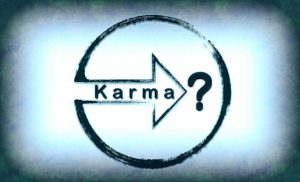 Improving Your Karma With Entanglement

The wave function collapses. The object can instantly become an object through light hitting it, when taking a picture of it, for example. Or through looking at it. Or, even stranger: just by thinking about it. Thus, the mere knowledge in the experimenter’s mind, is sufficient to cause the wave-function to collapse. And thus create an object.

This means that consciousness is directly related to creating the so called physical world. But it gets even crazier. And this is where karma may be explained through Quantium physics. It’s called entanglement.

Experiments have proven that these Quantium particles can be intimately linked, and in a way that acts as if there’s no space between them, and no time influencing their behaviour. This was done with light particles that were split. Although separated, when one was changed, its twin would do the same.

I think this proves that everything, and everyone is connected, and influences each other.

This Is How Karma Connects And Influences Future Incarnations Too

Everything is connected, or entangled, and since time and space doesn’t really exist, it is easy to see how our Karma persists into the illusion of the future. This entanglement is why we can all share in similar objects and experiences. It gives us the illusion of collectively occupying three dimensional space with others.

So if mere thoughts can change the entangled reality we all share through conscious creation, it means we are constantly creating the template of our experience, which we call Karma through pure thought.

Thus, improving your Karma means improving the way you think. It’s pretty simple, don’t you think? But to do this you will need to learn a powerful technique.

Improve your karma: How To Create The Karma You Love

Daniela has an awesome and powerful e-mail course, on How To Create The Karma You Love. She will give you the powerful technique you need to learn. Take this FREE course now! Use the form above and sign up.